TECA’s smallest Laboratory Air Cooled Cold/Hot Plate, Model AHP-301CPV, offers precise temperature control, protecting food samples in a sensitive application. In this example, our customer has placed food samples into a simple aluminum block insulated with Styrofoam. The AHP-301CPV Cold/Hot plate can be used to control the temperature to a tenth of a degree. This thermal management solution provides a small footprint. More importantly, the samples can be reliably cooled or heated to a variety of temperatures per the end user’s requirements. Our customer reports the rapid transition between temperatures is beneficial.

The AHP-301CPV, part of TECA’s extensive “CPV” product line is a UL/CSA, CE-Marked product with a decade of experience serving in laboratories worldwide. The built-in temperature controller and communications software allow for versatility in use. Modifications and additional accessories are available to suit the end user’s needs. Please explore the different sizes and types of cold/hot plates TECA offers here. If we can be of assistance, please do not hesitate to contact us. We would love to hear from you.  Phone 773.342.4900

Over a dozen TECA Cold/Hot Plates are operating in a cleanroom environment. As part of a significant research undertaking, the European Space Agency’s (ESA) microwave lab has assembled the navigation payload components of a Galileo satellite on a test bench. Components can be separately temperature controlled, using TECA Cold/Hot Plates. “This is important because part of the facility’s job is to recreate anomalies occurring aboard the satellites, which includes reproducing their environment” says ESA microwave engineer César Miquel España. 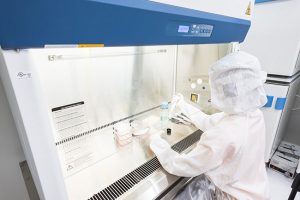 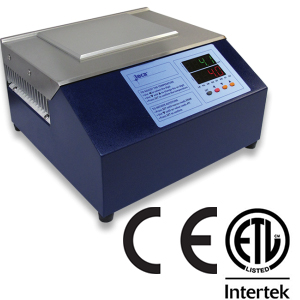 Several TECA Cold/Hot Plates are being used by our customer in their manufacturing process for COVID-19 tests. The AHP-301CPV is UL/CSA and CE marked. It has universal power supply for 100-240 VAC and includes communications software. With the premium features that all our “CPV” products offer, the AHP-301CPV is economically sized for smaller applications. The small footprint also makes it ideal for use at individual workstations. Please contact TECA for pricing or for sizing help. Click on the previous links to view product information on our website. 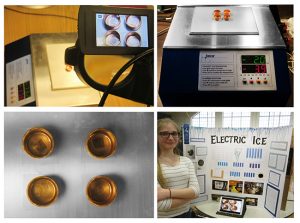 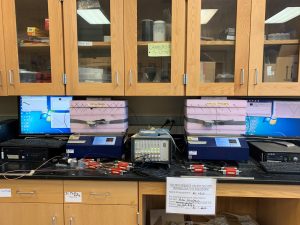 A large state university in the U.S. has been using a collection of several TECA Model AHP-1200CAS Cascaded Cold/Hot Plates for years, to perform various research on the characteristics of cement paste samples.

In a cascaded system, the thermoelectric element acts as a heat sink for the element above it. Therefore, the more “stages” there are, the colder the top-most stage becomes. The research team which provided this photo successfully ran temperature profiles such as: from -20° to +24°C, and +23° down to -40°. This consistent accuracy and reliability of TECA Cold/Hot Plate products are a smart addition to any lab needing plug-and-play benchtop cooling or heating.

All Laboratory-Style TECA Cold/Hot Plates include an integral temperature controller and tecaLOG communications software. Versatile accessories are available such as cutting surfaces for grossing, barriers for lab animals, and more. The possibilities are endless. Please reach out to us for help selecting the right TECA solution for your lab. Ph 773.342.4900. 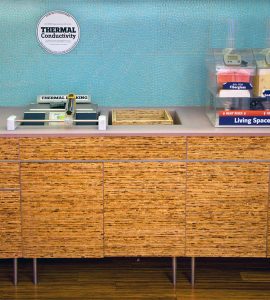 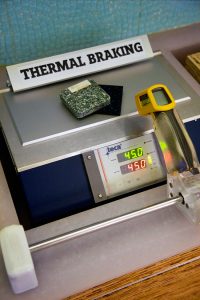 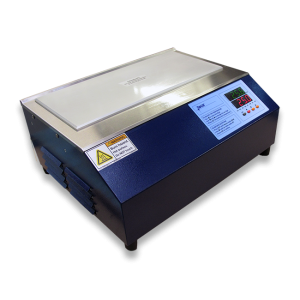 Cooling micro-organisms in a lab:

Recently, a prestigious U.S. university’s research lab contacted TECA. The team needed to cool a 340-well micro plate. Their vendors had many hot plates to offer, but no one seemed to offer a like product for cooling. The lab team was happy to discover TECA products online and the AHP-301CPV proved to be the right fit.

The lab’s 340-well plate is filled with a solution housing micro-organisms. To get the organisms to migrate to the bottom of the wells, the lab needed controlled cooling to 0degC. However, there is a limited temperature range in which the organisms do not degrade so precise control was paramount. 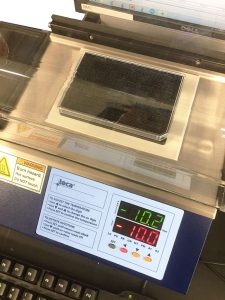 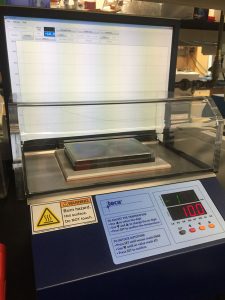 A materials science company specializes in creating foams with specific porosity for use in electric vehicles, batteries, thermal interface materials and ceramic-metal interfaces. Utilizing a TECA thermoelectric cold plate as a component within the freeze tape caster ensures the manufacturing process remains environmentally friendly. Peltier cold plates use no freon, coolants, or chemicals of any kind. In this example, the customer has slightly modified a commercially-available, off-the-shelf (COTS) TECA cold plate to reach the desired -10C set point. 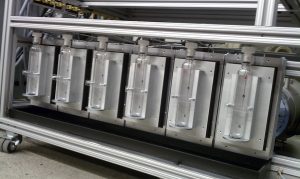 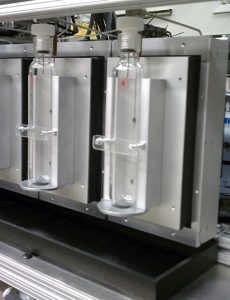 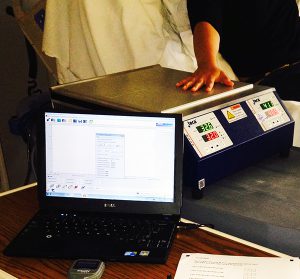 Using TECA’s Dual Cold/Hot Plate, a health psychology lab in a large university is conducting a study on the relationship between pain sensitivity and inflammation in human subjects.

The human subject places his or her hand on the surface of TECA’s AHP-1200DCP Dual Cold/Hot Plate for a period of time. Researchers are using set points between 52 °C and -4 °C and can utilize the included communications software to program ramp and soak profiles.