Thermoelectric cooling, is a solid-state method of heat transfer through dissimilar semiconductor materials.
It is also called “the Peltier Effect” after the French watchmaker who discovered the phenomenon in the early 19th century. Like their conventional refrigeration counterparts, thermoelectric cooling systems obey the basic laws of thermodynamics. However, the actual system for cooling is different.In a conventional refrigeration system, the main working parts are the evaporator, condenser, and compressor.
The evaporator surface is where the liquid refrigerant boils, changes to vapor, and absorbs heat energy. The compressor circulates the refrigerant and applies enough pressure to increase the temperature of the refrigerant above ambient level. The condenser helps discharge the absorbed heat into surrounding room air.

The three main working parts in a thermoelectric refrigeration system are a cold junction, a heat sink, and a DC power source.
Two dissimilar conductors replace the refrigerant in both liquid and vapor form. The cold sink (evaporator surface) becomes cold through absorption of energy by the electrons as they pass from one semiconductor to another, instead of energy absorption by the refrigerant as it changes from liquid to vapor. The DC power source pumps the electrons from one semiconductor to another, and the heat sink (condenser) discharges the accumulated heat energy from the system.Therefore, the thermoelectric cooling system refrigerates without refrigerant and without the use of mechanical devices, except perhaps in the auxiliary sense.
The semiconductor materials used in thermoelectric cooling are N and P type, named because they either have more electrons than necessary to complete a perfect molecular lattice structure (N-type) or not enough electrons (P-type). The extra electrons in the N-type material and the holes left in the P-type material are called “carriers,” responsible for moving the heat energy from the cold to the hot junction. Good thermoelectric semiconductor materials such as Bismuth Telluride greatly impede conventional heat conduction from hot to cold areas, yet provide an easy flow for the carriers.

Thermoelectric Modules:
Traditionally thermoelectric modules have been rated at two points under two conditions. The first point is the maximum load (Qmax) at zero degrees delta-T and the second point is the maximum delta-T at a no load (Q=0). The load is defined as the amount of energy removed from the cold side ceramic. The delta-T is defined as the temperature difference between the cold side and hot side ceramics. Extensive curves showing the performance under other conditions are often available.

Thermoelectric systems:
Reputable system manufacturers rate thermoelectric systems in watts or BTU/HR under zero degree delta T conditions. In this case, the load is defined as the amount of energy removed from the cooling medium. For air cooled systems the delta-T is the temperature difference between the cooled medium and the ambient air. The cooled medium would be a cold plate in direct contact applications, a fluid such as water in liquid chiller applications and the enclosure air return temperature in air conditioner applications.

Air Conditioners, Europe:
The Europeans have developed a standard, DIN 3168, which specifically addresses enclosure air conditioners or coolers for distribution boxes. This standard does contain temperature information specific to the rating of such air conditioners. The load or the “useful cooling capacity”, is only the useful sensible heat flow which is taken up by the appliance for lowering the inside temperature of the distribution box. The temperature rating conditions for DIN 3168 are for the evaporator inlet (enclosure) temperature and condenser inlet to be an equal 35 °C, or for the evaporator temperature to be 35 °C and the condenser temperature to be 50 °C, stated L35 L50. 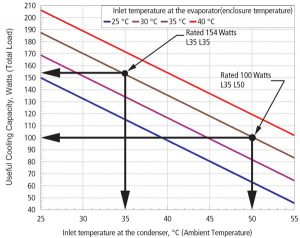 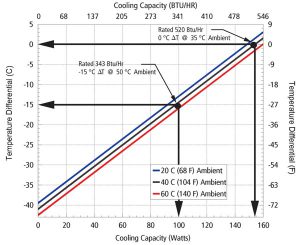 TECA builds both air cooled and liquid cooled products. The model numbers of the products (example: AHP1200XMHC) can be very descriptive of the product. Air cooled products (prefix -AHP) use fans and finned heat sinks to transfer heat. Liquid cooled products (prefix-LHP) require a flow of water or cooling fluid to dissipate the heat. Most product families offer a selection of DC or AC voltages and temperature controllers detailed with complete part numbers on their individual catalog pages. Standard and custom air conditioners, cold plates (suffix-CP and CPV) and liquid chillers (prefix-TLC) are all made by TECA. Cooling is standard and heating can be optional or standard. Products capable of both heating and cooling typically but not always include “HC” in the suffix. The heating can be from resistive heaters or via reverse polarity (rev. pol.) input to the thermoelectrics.

Air Conditioners:Air conditioners come in many styles to meet many needs. These styles are indicated by the prefix and the suffix in the model number. The suffixes are “AHP”, air cooled heat pump, “FHP”, flush mount heat pump, and “LHP”, liquid cooled heat pump.
“AHP” air conditioners mounted through an enclosure wall with the cold side heat exchanger inside and the hot side heat exchanger outside of the enclosure.
“FHP” air conditioners do not protrude into the enclosure.
Products ending in “X” such as the AHP-1200X are for harsh environments. Military grade fans are used on the environment (hot) side of the units. Power supply components exposed to the environment are sealed from the environment. One step more rugged is the “XM” line of products. These products go the extra step of using military grade fans on both the hot (environment) side and the cold (enclosure) side. These products can typically handle more shock and vibration, especially along the fans axis of rotation.
One step less rugged is the “XE” line of products. These are still suitable for outdoor environments and hose down applications. Rather than a military grade fan they use sealed industrial grade fans suited to the environment. Power supply components exposed to the environment are also sealed.
“XP” style products are designed for hazardous (explosive) environments. They typically use military grade fans on the exposed side of the unit with other design modifications required for the environment. Most have been evaluated by an NRTL as if they were open to the environment.
“CXP” style products, on the other hand, require a source of compressed air and are usually used on purged systems. NRTL evaluations are then performed on the entire system.
Those products whose model number has no suffix or end in “FF” are for a more benign factory, laboratory or office environments on NEMA 12 enclosures or similar. The products whose model numbers start with “LHP” use a liquid plate heat exchanger. By their nature, these products do not have to be exposed to the environment at all. They can be mounted so they are completely inside of the enclosure. For this reason, the suffixes described above are used but they are not as completely descriptive as they are for the air cooled series.

Cold plates are also offered in air and liquid cooled versions. The cold plate itself is a flat aluminum plate. The prefixes “AHP” and “LHP” and suffixes “CP”, “CPHC” and “CPV” are also used as descriptive modifiers in cold plate model numbers.
“CPV” style cold plates were designed to fill most laboratory and bench top needs. Features such as heating, temperature control, ramp/soak programming, remote sensors and communications are standard on “CPV” products. “CP” style products are general utility type cold plates often used as components in other products, in product assembly or testing, as prototypes for future OEM development or where simple direct contact cooling with no bells or whistles is required. They can be mounted to enclosures, walls or structures.

Standard liquid chillers (prefix “TLC” and “RLC”) are all air-cooled products. They come in versions VAC or VDC, with or without temperatures controls or pumps.
The TLC-1200 is a compact general purpose liquid chiller. The TLC-700 is a compact liquid chiller including reservoir, pump, and several controller options.
The TLC-900 offers the highest capacity in a benchtop unit, best control and the largest selection of pumps.
The “RLC” products are rack mounted liquid chillers offering all of the features of the TLC-900, the highest capacity in 19” rack mount configuration.
The “TLC Cube” products are for building into OEM applications, come in many capacities and a wide selection of input voltages.